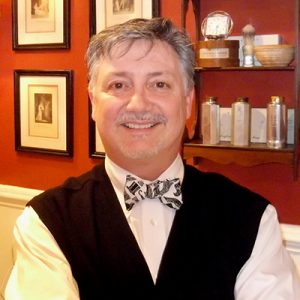 STEPHEN A. HALE attended UNC Greensboro and studied in New York City. He received a certificate in musical theatre from the American Musical and Dramatic Academy and performed Off-Off Broadway. Stephen has performed throughout the South-east and numerous theme parks across the country. Around the Triad, he has directed and choreographed productions for theater companies in Greensboro, Burlington and Reidsville. When not in the director’s chair, Stephen can be seen onstage throughout the area. Audiences may remember Stephen for his appearances as the Scarecrow (6 times) in Wizard of Oz, the Emcee in Cabaret or more recently as the Stripper with a Horn of Gold in Gypsy,